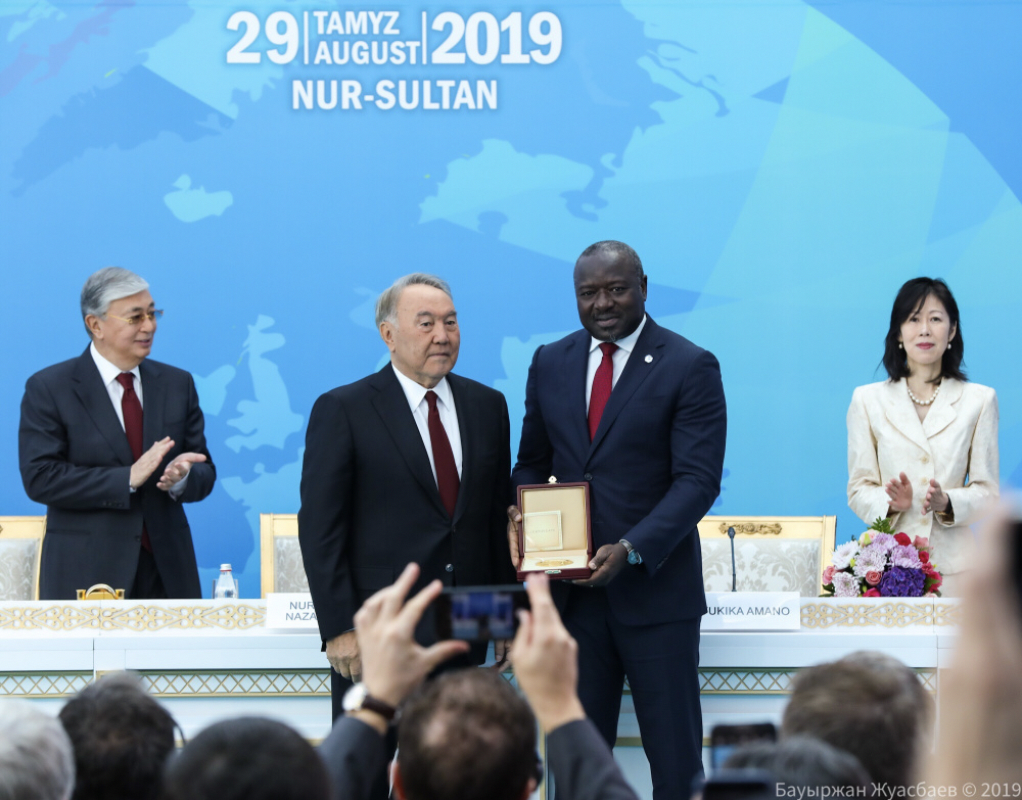 It is a great honour to be awarded the Nazarbayev Prize for a Nuclear-Weapons-Free World and Global Security together with the late Director General of the IAEA Yukiya Amano.

In receiving this distinguished award, I find myself filled with many emotions. It is a distinct privilege to be recognized for my efforts to enhance global peace and security. But I am also filled with sadness as I continue to mourn a friend, ally, and partner in our shared objectives of preventing the proliferation of nuclear weapons and achieving the security of a world free from nuclear weapons. Let’s cherish his memory and acknowledge his remarkable service towards our common cause.

Although it may seem as a distant reality, a nuclear-weapons-free world cannot exist without a nuclear-test-free world. And who could attest to this better than the First President of the Republic of Kazakhstan? On 29 August 1991, thanks to his courage and commitment to global peace and security, the Semipalatinsk Nuclear Test Site was permanently closed. Leading by example, Kazakhstan also voluntarily renounced the fourth largest nuclear arsenal in the world. The Polygon, one of the Soviet Union’s two major test sites, became a prominent venue for research on the peaceful use of nuclear energy.

This experience has given Kazakhstan an added sense of purpose and responsibility pushing for a total ban on nuclear tests. I would like to express my full-hearted gratitude to Kazakhstan and to Elbasy personally for what he has done over the years. You have ensured that Kazakhstan remains a moral leader in the quest for a world free of nuclear weapons.

Let me also express my heartfelt thanks for your acceptance to join the Comprehensive Nuclear-Test-Ban Treaty Organization’s Group of Eminent Persons and to lead the CTBTO initiative “Champions of a nuclear test free world for a nuclear weapons free world”. Your commitment and experience will be invaluable in achieving the CTBT entry into force. Ladies and gentlemen,

This ceremony takes place on a highly symbolic day. 29 August is the International Day against Nuclear Tests.

Since the early days of the atomic age, the United States, the USSR and other countries recognized that ending explosive nuclear testing globally was absolutely vital to halting the proliferation of nuclear weapons. However, it took nearly 50 years to finally initiate negotiations on the Comprehensive Nuclear-Test-Ban Treaty.

29 August marks the International Day against Nuclear Tests. However, let me assure you, we will continue to work hard to make sure that not only today, but every day, is a day against nuclear tests. The CTBT is also an important confidence building measure, ensuring that no nuclear test goes undetected, and providing a basis for continuing dialogue and expanding cooperation. In the context of the NPT, the Treaty serves as a common denominator for the NWS and NNWS.

Excellencies, dear Friends, With uncertainty and insecurity clouding the international political arena, it has become all the more important to advance the Treaty and ensure it enters into force.

A permanent and verifiable end to nuclear testing will serve as a significant stepping stone towards nuclear disarmament. This is what I have committed to pursuing, and what I will continue to fight for in the years to come. We must finish what we started. We owe it to all people who devoted themselves to this cause, and to the future generations for whose security we must fight for. Thank you.