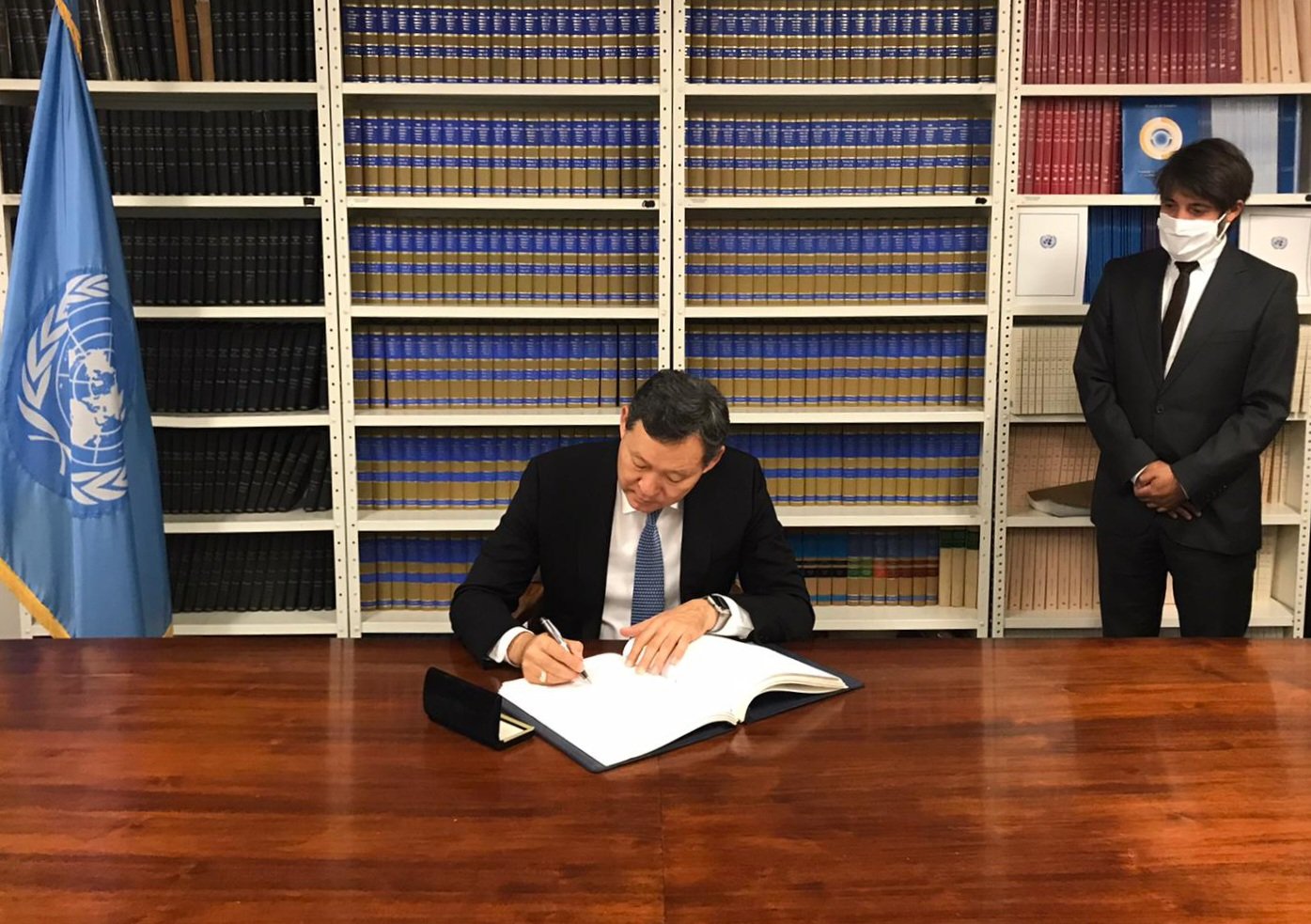 On September 23, at the Headquarters of the UN, the Permanent Representative of Kazakhstan to the United Nations Mr Kairat Umarov signed the Second Optional Protocol to the International Covenant on Civil and Political Rights aimed at abolishing the death penalty.

The document was signed in accordance with the Decree of the President of the Republic of Kazakhstan Kassym-Jomart Tokayev, and reflects the political reforms being carried out in Kazakhstan in order to protect the rights of citizens. This development is also one of the results of the work of the National Council of Public Trust, created in order to establish a constant dialogue between the authorities and society in order to build a harmonious state.

This was one of the key aspects of the State of the Nation Address of President Tokayev of September 2, 2019, aimed at a gradual and thoughtful political transformation of the country through the implementation of the concept of a “listening state”.

Read More on this event in The Astana Times

It should be noted that according to Kazakh legislation, the Second Optional Protocol to the International Covenant on Civil and Political Rights is subject to mandatory ratification by Parliament, since it affects human and civil rights and freedoms, and also establishes rules other than those provided for by the laws of the Republic of Kazakhstan. Thus, this international treaty will enter into force only after its ratification by the Parliament of Kazakhstan.

Upon ratification, as per article 2, paragraph 1, of the Second Optional Protocol, the only permissible reservation would be made at the time of ratification of accession, providing for the application of the death penalty in time of war, following a conviction for the most serious crimes of a military nature.

According to article 15, paragraph 2, of the Constitution of Kazakhstan, “the death penalty is established by law as an exceptional punishment for crimes involving the death of people, as well as for especially grave crimes committed during wartime.” Accordingly, for the Protocol to enter into force in Kazakhstan, it will be necessary to introduce appropriate constitutional amendments and national legislative changes.

Currently 88 UN member-states out of 193 are parties to the Second Optional Protocol to the International Covenant on Civil and Political Rights aimed at abolishing of the death penalty.

According to this international document, the signatories shall undertake an obligation firstly, to not use the death penalty and, secondly, to take all necessary measures to abolish the death penalty within their jurisdiction.

Following the comprehensive assessment of the legal, humanitarian and political aspects of such an endeavor, by Decree No. 371 of July 14, 2020, the President instructed the Foreign Ministry to sign the Second Optional Protocol on behalf of Kazakhstan.

It is important to note that the abolition of the death penalty is one of the most debated human rights issues in the world.

In their resolutions, the General Assembly and the UN Human Rights Council regularly call on member states to take effective measures to abolish the death penalty.

There is a global trend towards rejection of this “archaic”, in the opinion of many, punishment. For example, on December 17, 2018 when voting on a General Assembly resolution, which proclaimed a global moratorium on the death penalty, 121 states, including Kazakhstan, voted in favor and only 35 voted against.

According to Amnesty International, at the end of 2018, there was a 31% decline in the application of this measure (690 executions in 20 countries) compared to 2017 (993). In 2019, a further decrease was recorded, with 657 executions. It must be noted that these figures do not include executions in countries with no official information published.

The most authoritative global body working towards the abolition of the death penalty is the International Commission against the Death Penalty (ICDP), whose members include former presidents, heads of government, senior UN officials, lawyers and journalists.

The Commission is actively promoting the idea of declaring Central Asia and Mongolia the first region in the world free of the death penalty, and reacted positively to the instruction of the President on December 20, 2019 to consider the possibility of entirely abolishing the death penalty within Kazakhstan.

Among the Commonwealth in Independent States, Uzbekistan, Kyrgyzstan and Turkmenistan have already joined the Second Optional Protocol. Russia and Tajikistan are observing moratoriums on executions.

It should be noted that public opinion on the issue of capital punishment is subject to sharp fluctuations, and is particularly affected by serious crimes and their coverage in the media.

Opponents of the abolition of the death penalty believe that the application of this punishment is a serious deterrent aimed at preventing the most serious crimes, including murder, participation in terrorist activities, genocide, crimes against humanity, and drug trafficking.

At the same time, there are known examples when the death penalty was abolished even though the public was in favor of it. This happened in Germany, Canada, the UK, and France.

Furthermore, according to the results of a study conducted by US scientists, who analyzed the correlation between the murders committed and the presence of capital punishment both within the United States (in various states) and abroad, they concluded that there was no connection between the use of the death penalty and the number of murders.

The decision of the President to sign the Second Optional Protocol fits into Kazakhstan’s ongoing political reforms aimed at further protecting the rights of citizens. Eliminating capital punishment is one of the most important steps in this process. Like many countries, there is still work to be done to bring Kazakhstan’s legislation in line with all adopted international obligations, but this represents another significant milestone for the country.